Cyclophilins are used by some viruses for infection and replication purposes and represent attractive targets for antiviral therapy. The best characterised cases are the use of cyclophilin by HIV and HCV. Two non-immunosuppressive cyclophilin inhibitors are currently in clinical development for hepatitis C virus infection (Alisporivir®, Novartis, and SCY-635, Scynexis Inc.). Both compounds are also active against HIV, but apparently of less clinical relevance. The recent report by Scynexis that SCY-635 induces the endogenous synthesis of several inteferons could suggest a perhaps broader profile of antiviral activity (Hopkins, AASLD 2011).

Non-immunosuppressive derivatives of both FKBPs and cyclophilins have been shown to have potent antiproliferative and anti-inflammatory properties. Both cyclophilin and FKBP have leukocyte chemotactic activity which is inhibited by cyclosporins and FK506. Cyclophilins are secreted from many cell types upon contact with LPS. In the extracellular space cyclophilins bind to CD147, a membrane receptor expressed on many cells and elicit the production of matrix metalloproteinases and white blood cell chemotaxis. Both chemotaxis and MMP production are blocked by inhibitors of cyclophilin PPIase activity. Cyclosporin is approved to treat ocular inflammations (uveitis, dry eye), psoriasis, rheumatoid arthritis, and is currently undergoing clinical trials for COPD and cigarette smoke-induced pulmonary emphysema.

The PPIase Pin1 has specificity for pSer/pThr preceding proline and regulates a number of proteins involved in mitosis and cell cycle progression in a phosphorylation-dependent manner. Depletion causes mitotic arrest and apoptosis, whilst overexpression results in G2 phase arrest. Not surprisingly, Pin1 became a therapeutic target for cancer investigated by many companies. Presently, there is no Pin1 inhibitor known to be in clinical development, illustrating the difficulties of PPIase-directed drug discovery. Cyclophilins have been shown to act as survival factors for tumour cells against hypoxia and chemotherapy and are frequently overexpressed in solid tumours. A strong correlation has been found for cyclophilin overexpression and malignant transformation (reviewed by Lee & Kim, 2010). Cyclosporin is currently undergoing clinical trials in combination with cytostatic agents such as Nab-Paclitaxel (metastatic breast cancer), Etoposide and Mitoxantron (Acute myeloid leukemia), Irinotecan (solid tumours, colorectal cancer). FK506 has recently been shown to inhibit the growth of breast cancer (Klauber-DeMore, 2011) and accumulating evidence implicates some FKBP members in a variety of processes implicated in malignant transformation and tumor growth, such as the cell cycle and survival and apoptotic signaling pathways.

Opening of the mitochondrial permeability transition pore (MPTP) plays an important role in damage-induced cell death. Agents inhibiting the MPTP have therapeutic potential for treating acute neurodegenerative diseases such as ischemia and reperfusion injury, trauma, and stroke. Cyclophilin D is an integral constituent of the MPTP, maintaining the pore in a state of high responsiveness to opening stimuli. Inhibition of cyclophilin D has been shown to prevent cell death. Clinical trials with cyclosporine in acute myocardial infarction have shown promising results (Piot et al, 2008) and ongoing trials evaluate the cardioprotective effects of cyclosporine in open heart surgery.

The FKBP inhibitor FK506 (Tacrolimus) has been shown to have protective effects on hepatic ischemia and reperfusion injury and is currently undergoing clinical trials as an ex vivo rinse in liver transplantation.

A number of reports document the activity of FK506 to induce nerve regeneration and muscle innervation in preclinical experimental models. Ongoing clinical studies aim to verify this activity in patients (prevention of erectile dysfunction after radical prostatectomy and functional recovery after peripheral nerve injury). 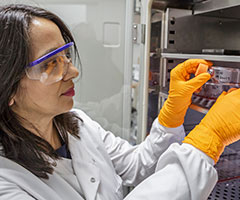 Prolyl isomerase inhibitors are an emerging class of drugs, acting on an unexploited class of therapeutic targets and representing a novel category of drugs acting by novel mechanisms.